Another week in the books and its once again time to check in on my hobby progress which was somewhat light this time.  All I have to show is three painted up Hobbit Militia who are done other than being based.  Surprisingly, I had a pretty good time painting these metal sculpts which don’t have the greatest faces but are otherwise pretty nice.  I really spent a lot of time on the backs of these minis as you can see in the pictures below, I am quite proud of that part of them.  as odd as that is. 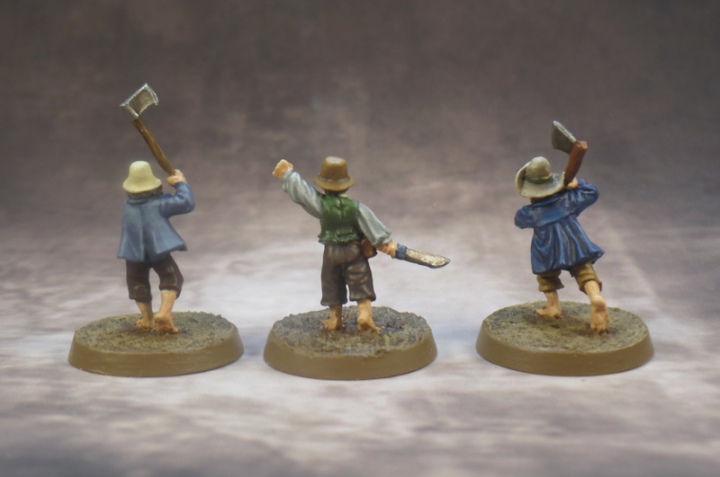 One thing I realized as I painted these Hobbits and thought about the various projects I have going is that I’m nowhere close to playing any Scouring of the Shire scenarios so I might as well accept that and consider that more of a long-term project instead of anything I can achieve in the near future.  The scenarios in the book are tempting because they have such low model counts that you’ll trick yourself into thinking, if I just paint up a couple Hobbits and a few Ruffians, I’m good to play one surely.  But the reality is, for me anyway, is that there is a lot of terrain I need to build/add to my collection to play any of the scenarios and so I can chip away at the painting and terrain needed to play but there’s no reason to think I can play any of the scenarios soon or should even focus on it.  Instead, I will focus on the An Unexpected Journey stuff for the near future as I’m much closer to being able to play more games with it and achieve some goals along the way but more on that in a bit.

I also got my first of two Made To Order purchases from GW today and I was so pleased with the sculpts on Gandalf and Bilbo, I thought I’d show them off.  The Goblin King is very much representative of “Failcast” and will require quite a bit of prep work but the detail of the sculpt is quite nice.  I envision Gandalf being used in some cool Shire pictures (or maybe even a display base!) but I don’t need him at all for gaming purposes.  I suppose the other two minis are similar in that regard but the collector bug bit me when it came to these three sculpts.

So I’ve mentioned the Eriador/AUJ Project quite a bit without really describing what it is I’m working on and if you don’t have the An Unexpected Journey rulebook or There and Back Again book, you probably have no idea exactly what I am working towards.  So I figure I might as well lay it out here and maybe I’ll check off some of this as I work towards it to help us track it better.  I have briefly described the scenarios that make up the campaign and then I describe what I have finished and what I need to complete for each scenario below that.

The An Unexpected Journey campaign contains the following scenarios:

Roast Mutton – The three trolls face off against Thorin’s Company.

The Chase – Azog’s hunter orcs try to find and kill Thorin’s Company while Radagast and his sleigh serve as a distraction.

The Capture – Thorin’s Company is surprised and trapped by the goblins in the caves of the Misty Mountains.

Flight to Freedom – The dwarves seek to regain their weapons and fight their way out of the Goblin King’s grasp.

Breakout – Thorin and company attempt to escape the goblins’ domain once and for all.

Out of the Frying Pan – Azog’s orcs seek to slay the dwarves who try to flee into the trees and take refuge.

Into the Fire – Thorin is in trouble as the orcs press the dwarves further and only the eagles can rescue everyone.

And with that description, here is what I have and what I need for each scenario:

Roast Mutton To be Completed – A little more terrain would fill out the board.  Sacks would be nice and stable and/or some ponies (though quite frankly I’m not sure how much more work I’m willing to put into this scenario as it isn’t that fun)

The Chase To be Completed – Radagast on Sleigh, Fimbul (who is out of print currently), 7 more Hunter Orcs on Fell Warg, Yazneg on foot (I bought my copy on eBay and the foot version was not worth painting due to finecast), more hills and rocky terrain.

The Capture To be Completed – Rocky terrain and lots of it (which is annoying because it wouldn’t get used much outside of this scenario for the foreseeable future).

Flight to Freedom To be Completed – More Goblin Town Terrain (at least another box or probably two), extra goblins (because of the Goblin Scribe).  Some rocky terrain would be nice but is not a must have for the scenario to be playable.

Breakout To be Completed – More Goblin Town Terrain (at least another box or probably two).  Some rocky terrain would be nice but is not a must have for the scenario to be playable.

Out of the Frying-Pan Completed – Thorin’s Company, 5 Hunter Orcs on Fell Warg

Out of the Frying Pan To be Completed – Fimbul (who is out of print currently), 7 more Hunter Orcs on Fell Wargs, 12 Fell Wargs, at least 8 more trees, more rocky and hilly terrain.

Into the Fire To be Completed – Azog, Fimbul (who is out of print currently), 1 more Hunter Orc on Fell Warg, 6 Fell Wargs, 4 Great Eagles, Gwaihir, at least 8 more trees, more rocky and hilly terrain.  This scenario technically calls for a board with cliffs but that is way beyond the scope I am willing to take on for this project.  I can’t see it being worth it for this one scenario either.

As you can see, I’m probably halfway or maybe even past halfway in this project.  Fimbul is the biggest obstacle to playing the rest of these scenarios and I’m certainly hoping GW re-release him soon.  I have plenty to work on in the meantime and my plan is to focus mostly on these projects until they’re done or I get bored.  We’ll see how I get on with it 🙂