As promised, I want to take a closer look at the new Scouring of the Shire book which I am incredibly excited about.  While I’m happy to show a few images from the book, I’m not going to give away too much as I think everyone who is interested should go pick up a copy and support MESBG.  I had high expectations for this book (possibly even unfairly so) and the book contains a number of surprises, so let’s jump in! 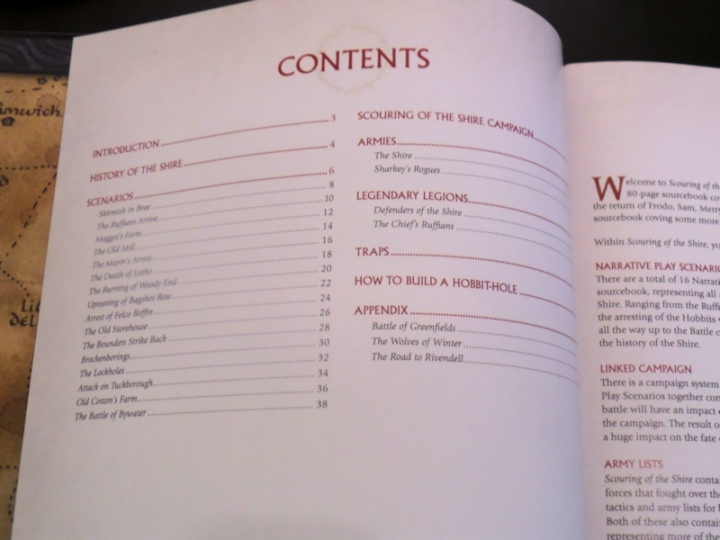 What does it Contain? – As you can see from the Table of contents pictured above, a little over half of the book is scenarios with most of the rest of the book covering rules and profiles.  There is a brief section on creating your own hobbit hole which is appreciated as well.  As you are probably already guessing, this is primarily for people who want to play narrative scenarios.  There are rules in here for armies and Legendary Legions which will be useful for points matches and competitive play but I feel that this book is going to be enjoyed most by narrative players. 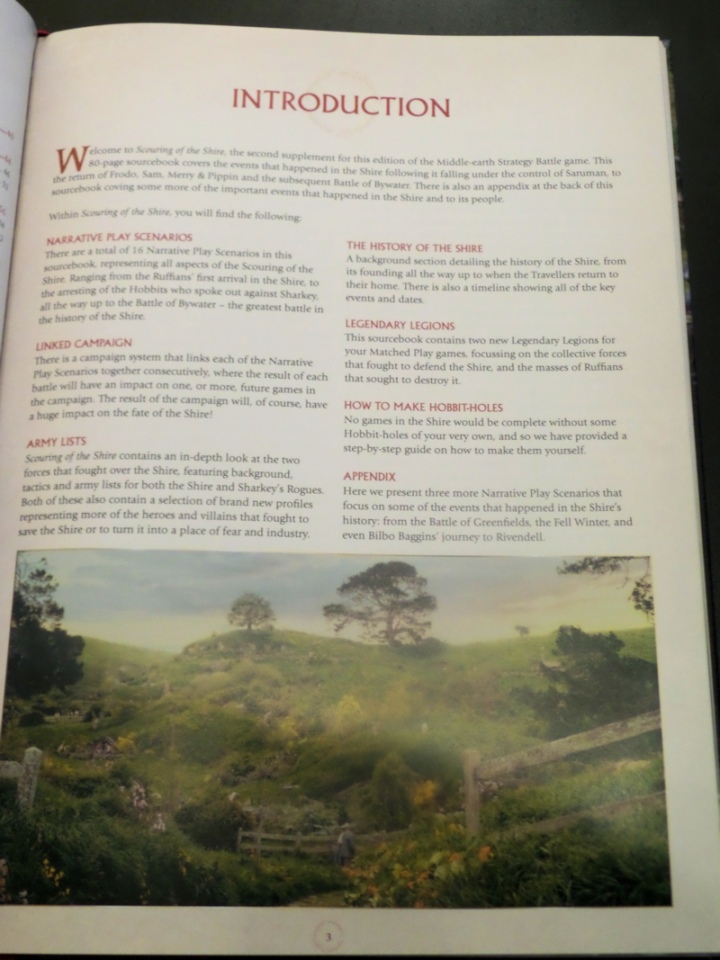 How are the Scenarios? – As followers of the site know, I only really focus on the narrative side of this game.  So I was really excited to see what this book would contain in that regard.  Featuring 19 scenarios is really impressive and while all of the original scenarios from the first Scouring of the Shire scenario are here, there are a lot of new ones too.

While I can’t judge how balanced or fun the scenarios are without playing them, what impresses me is that they look to have a lot of character and narrative potential.  One thing that helps is all of the new hobbit and ruffian characters.  Almost every scenario features a new character that is coming out from Forge World which should make each scenario pretty fun to play.  It is worth noting Scouring of the Shire features low model count games.  Most scenarios have between 15-30 minis in total and several scenarios have less than that.  A lot of the scenarios are on 2 feet by 2 feet boards so anybody who wants to play small scale scenarios that don’t take up tons of room will really like what is on offer here.  As far as terrain requirements go, you’ll want plenty of trees and you will need to build some hobbit holes as well.  There’s plenty of other stuff like hedges and fences that would be useful for some scenarios as well.  It is also worth noting that a couple of scenarios require 4+ hobbit holes so that part of playing through the scenarios will take time and money in addition to the minis.

With that said, most of the scenarios seem really exciting to play.  The Death of Lotho is a great example.  It features Worm skulking around to try and assassinate the corrupt leader of the Ruffians but the model itself doesn’t emerge until Worm is ready to strike!  The special rules look really fun and lend themselves to subterfuge by the evil player but Lotho can buy off attackers with his ill gotten wealth so it is kind of like an evil versus evil scenario in that regard.  This is just one scenario in the book that got me excited and almost all of them have something interesting about them that I want to try out.

It is worth noting that the original Scouring scenarios are back but have been updated with new characters and rules as best as I can tell.  So if you’ve played them in the past, they will hopefully be worth giving another go.  The other thing that returns is the campaign rewards where the winner of each scenario gets some kind of benefit in a future scenario.  Some of these are really thematic like Farmer Maggot can show up in another battle if he defends his farm successfully.  Scouring of the Shire was one of the first LOTR books to have this system and I am excited to try it out in the future.  I think it should deliver a really nice narrative, perhaps even more than other campaigns GW has made thus far.

What else is in the book? – There are profiles for the new Ruffian and Hobbit characters as well as Legendary Legions.  I believe you need the Armies of the Lord of the Rings book for the generic Hobbit troop profiles which might rub some people the wrong way.  It does require a lot of different books to play the game but there are worse problems to have at the same time.

While they aren’t part of the narrative campaign, the appendix contains a few additional scenarios which return from the original Scouring of the Shire book.  These look like fun and are scenarios I’ve been wanting to play in the future so I’ll definitely give them a go.  There are a number of wackier (but still fun looking) scenarios from the original book which were not brought to the new edition so it is still worth tracking down the old book for LOTR and Hobbit fanatics like me 🙂

Any disappointments? – There are a couple unfortunately.  This book is a little lacking in new, quality images and terrain inspiration.  For example, the images do not feature any of the new Hobbit and Ruffian characters which is strange considering they have all been revealed by Games Workshop.  I wouldn’t expect GW to show you how to build a board or anything like that but it is disappointing that many the images use old terrain and boards featured in the original Scouring of the Shire.  While these images looked great ten plus years ago, making terrain has really advanced since then.  The newer images feature the work of someone featured on Warhammer Community and while his Hobbit Holes look nice and are well done, they are not nearly as inspiring as the images were in the original book.  When I saw those images, I knew that I HAD to build a Shire board one day.  This book is really lacking in that kind of inspiration and in some cases, there are scenarios that don’t even really give you a great idea of what the board should look like beyond the map/drawing each scenario usually comes with.

The other thing worth mentioning is that while the book is cheap, it is surprisingly slim.  Anybody who isn’t a fan of narrative scenarios will probably not find enough content in this book to justify picking it up unless they want to play Hobbits or Ruffians.  That is not a negative for me but for other players, it may deter them from buying it.

My hope is that this book is a hit for GW and they continue making more narrative book scenarios like this.  There’s plenty of room for Battle Companies and points match type supplements too but I think narrative scenarios should be a staple of this game.  It is truly fantastic to see GW remake/update this supplement which was widely regarded as one of the better ones in LOTR SBG as well.  I’m pleased with the updates they’ve made and would strongly recommend this to fans of The Shire, narrative games, and/or someone looking for scenarios they can play without having to paint up tons of minis and make lots of terrain.

While I will continue to work on Hobbit: An Unexpected Journey Scenarios in the near future, you can expect to see progress on Scouring of the Shire Scenarios now too.  I can’t wait to get started and build the Shire terrain of my dreams 😀

12 thoughts on “MESBG Scouring of the Shire Book Review”