Since I performed so poorly in a tactical sense last game, I wanted to give this scenario a second try to see if it was me or the scenario that was the problem! 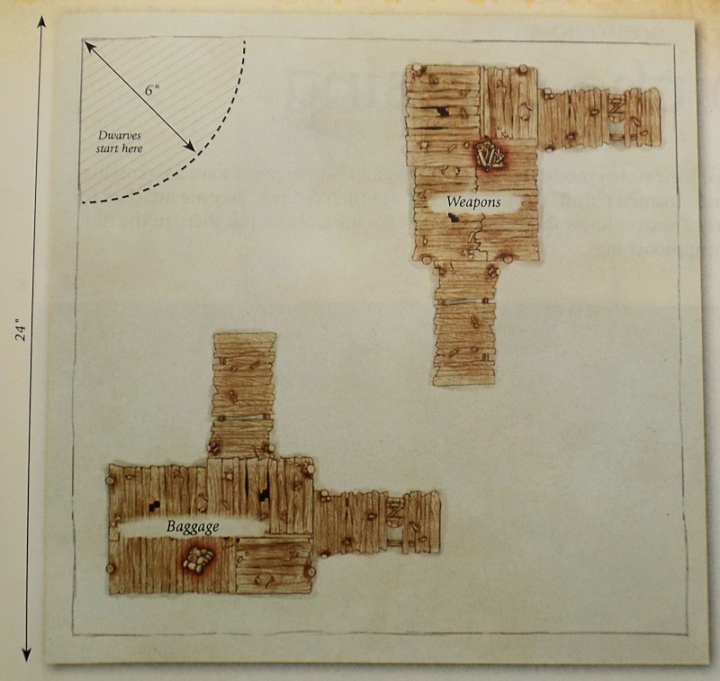 Pre-Game Thoughts – Unlike the previous game, I was going to move aggressively with the dwarves to ensure they got to one of the two objectives as quickly as possible.  With this in mind, they deployed as far inwards from the corner as possible.  Knowing that Ori was a real liability in combat and can’t really shoot all that well either, I planned on limiting shooting and not being afraid to use might to help me reach my goal. 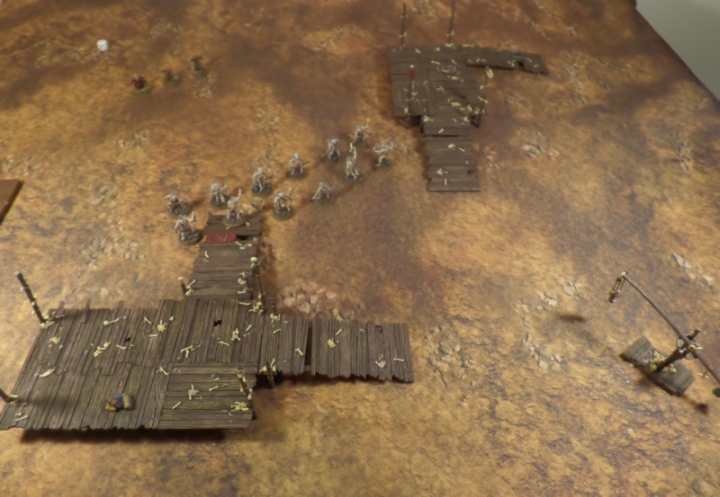 The evil side wasn’t going to change their tactics because quite frankly, they didn’t need to!  They won the last time handily and I didn’t see many flaws in that strategy.  Swamp the dwarves and/or wear them down as much as possible to win through attrition.

Battle Report – Wasting no time, the dwarves surged towards the weapon pile, Ori hung back a bit to shoot his slingshot once. The goblins moved towards the dwarves so there were plenty of targets for Ori to choose from.  One of the goblins in the front of the line fell to the shot which was a nice way to open the turn. The scribe was unable to bring any goblins to the battle field this turn.

The importance of Ori’s kill became clear in the next turn because the slain goblin would have made it into combat if he had survived, especially since the goblins won priority and ran straight for the dwarves. Thorin’s Company had favorable combats for this turn so they hoped to kill some goblins before more joined in. Ori panicked as he tried to fire off two shots at the goblins staring him down and missed both of them. Dori lost his combat but the goblin’s swipe failed to harm him. Nori would have lost his combat by a single point but decided to use a point of might and proceeded to kill a goblin. The goblin scribe summoned two goblins who entered behind the dwarves. 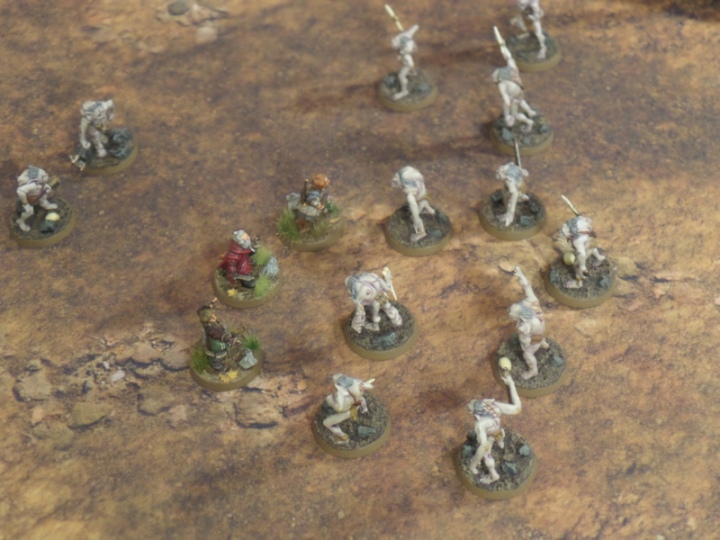 Things were already looking dangerous for Thorin’s Company in the third turn with the goblins winning priority. Dori called a heroic move to try and keep pushing forward and avoid being completely swarmed by the goblins. While the dwarves neared one of the weapon piles, they were surrounded by goblins with Ori getting the worst of it (five on one!). 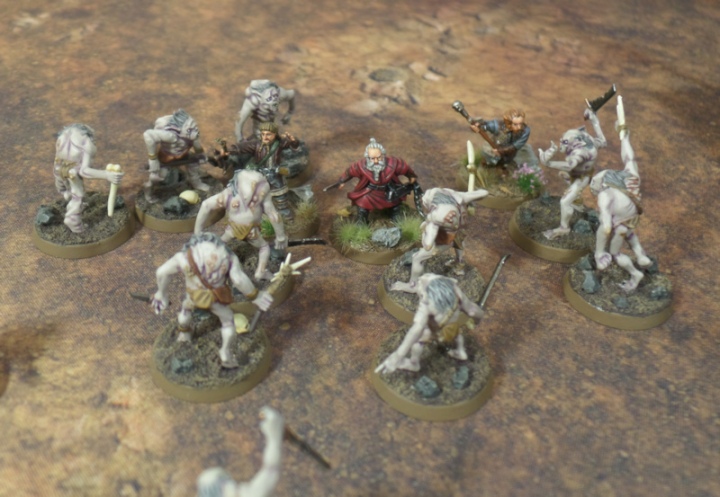 Shockingly, he won the fight but could not kill any of the goblins swarming him. Dori was able to slay a single goblin but Nori lost his duel and suffered a wound. The goblin scribe could not round up any goblins for the fight to the relief of the very busy dwarves!

At this point I realized I had a bit of a rules dilemma.  I assume the scenario is designed so that the dwarves have to use the walkways to go up to the objectives.  If you play this scenario differently, do let me know in the comments!  The dwarves pressed forward along the edge of the walkway to try and create a choke point against their foes and the goblins took the bait. 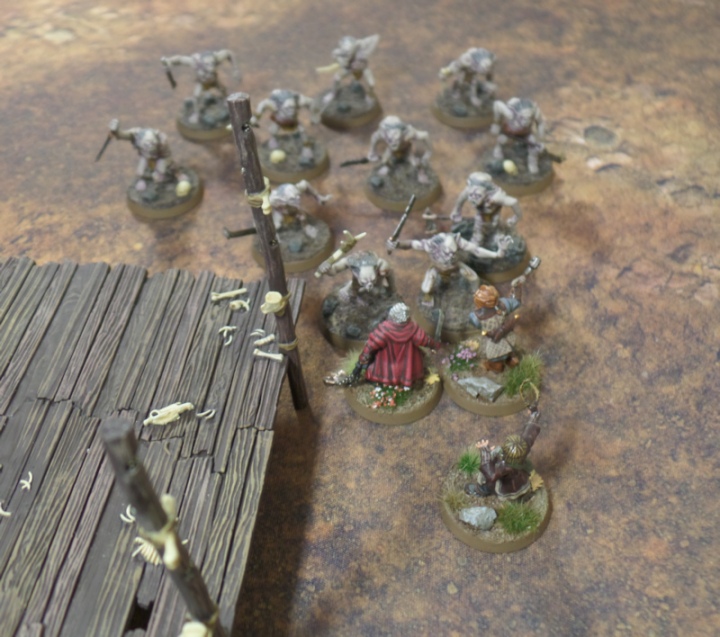 Ori called a heroic march to get himself and the dwarves to a safer position. As many goblins as possible crammed into the tight space but Thorin’s Company liked their odds in this next fight. Dori and Nori proved a capable defensive wall and each put a goblin out of their misery.  The scribe brought three goblins back and they showed up right behind the dwarves since they can choose whichever board edge they like!

The dwarves lost priority in the next turn and risked being trapped if the goblins were allowed to charge so Nori used a point of might for a heroic charge towards the three goblins. The goblins tried to squeeze the dwarves as much as they could but very few made contact much to Thorin’s Company’s relief. Ori faced the most goblins and needed a victory as much as anyone. Nori won his combat and killed one of the two goblins. Ori lost and took a wound after failing his fate save. The goblin scribe once again beckoned a goblin back to the fight. 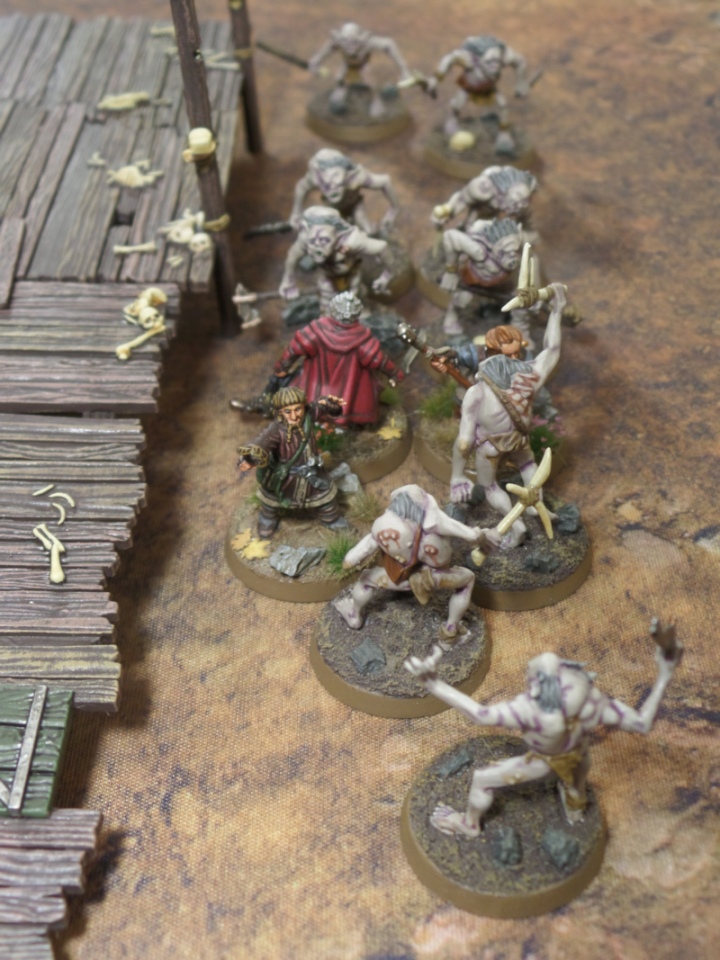 The dwarves won priority and could once again move forward. Ori faced a single goblin after the evil side decided to focus on juicier targets with their charges.  Much to the dwarves’ dismay, the goblin stabbed Ori with his bone pick and the dwarf slumped to the ground. The youngest member of the company was no more and it happened on Dori and Nori’s watch. Nori got revenge by slaying two goblins near him. Dori did not fare so well and was wounded by the goblin he faced.  The goblin scribe summoned all of the previously slain goblins back to the battle who once again chose to flank the dwarves.  Things looked very bleak indeed for Thorin’s Company. 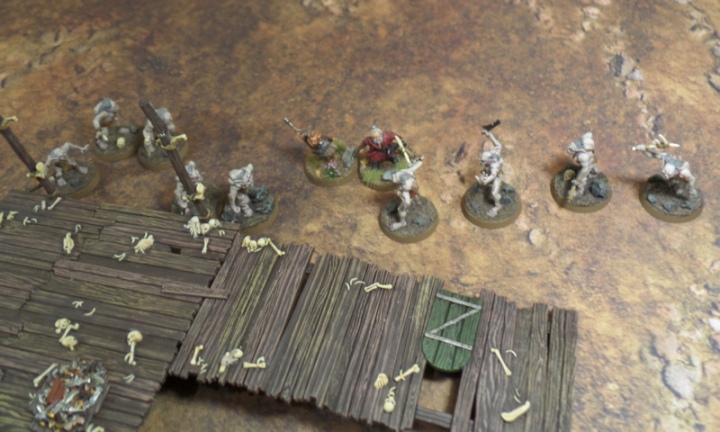 The dwarves won priority again and advanced slightly against the surge of goblins. Unfortunately, there was now no way to prevent them from being trapped. The goblins piled in and Nori and Dori knew their backs were against the wall. Nori lost his duel and fell to the goblins in a flurry of blows, thus leading to another goblin win!

Post Game Thoughts – My strategy was certainly better but it still wasn’t enough.  The second time playing this scenario was marginally more fun but by the end, I felt like this scenario is a bit unfair and my desire to play it again in the future is not particularly strong.

What is the problem?  The goblin scribe is incredibly powerful and if he passes a courage test (which he will at least a couple of times in a game), he brings back a number of goblins (sometimes as many as four or five).  This coupled with choosing whichever board edge they want, makes the scribe the lethal problem that the dwarves have to solve.  Unfortunately, unless you dictate that the goblins cannot come in on the board edge hear the dwarves (which is probably a good houserule to make), there is almost no way the dwarves win unless they roll incredibly well in combat.  Breaking the goblin force would be incredibly hard to do in this scenario as well.

By the time this game was over, I was slightly frustrated and I think this is the worst of the scenarios I have played.  I would highly recommend houseruling this one before playing to ensure that you do enjoy it.  Otherwise, you will find that Ori is almost impossible to protect and you will inevitably be swarmed by goblins.  I’m definitely looking forward to the next scenario where the Goblin King will debut and Thorin arrives to lead his comrades as well.  Thank you for reading and if you have any tips or suggestions for making this scenario better, do let me know in the comments.